Posted by AmazingTomHiddleston on 1 May 2013 in HIS WORKS

Return to Cranford (known in the United Kingdom as the Cranford Christmas Special) is the two-part second season of a British television series directed by Simon Curtis. The teleplay by Heidi Thomas was based on material from two novellas and a short story by Elizabeth Gaskell published between 1849 and 1863
The two-part Christmas special was transmitted in the UK by BBC One in December 2009. In the United States, it was broadcast by PBS as part of its Masterpiece Theatre series in January 2010.[1] Judi Dench, Imelda Staunton, Julia McKenzie, Deborah Findlay, and Barbara Flynn reprised their roles, with Jonathan Pryce, Celia Imrie, Lesley Sharp, Nicholas Le Prevost, Jodie Whittaker, Tom Hiddleston, Michelle Dockery, Matthew McNulty and Rory Kinnear joining the cast 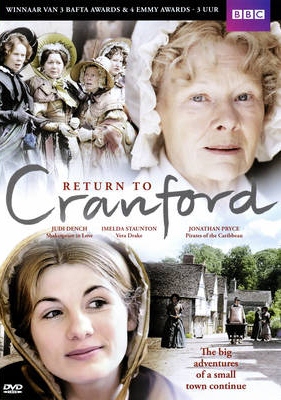 PLOT
When Mr. Buxton discovers William and Peggy are engaged to be married, he refuses to give his blessing, hoping instead, to match William with Erminia. Mr. Buxton then takes out his frustrations on Matty, blaming her for presenting the opportunity for the two to be alone on the train. Determined to marry Peggy anyways, William turns to Captain Brown for an internship at the railway.

Meanwhile, Peggy’s brother Edward becomes engaged as an agent to Mr. Buxton and takes charge of the sale of the parcel of land to the railway company. However, Edward embezzles some of the money. In addition, he evicts Mr. Buxton tenants, including Harry Gregson’s family, while falsely telling Mr. Buxton that other arrangements have been made for the tenants’ accommodation. Harry Gregson’s family leaves Cranford after failing to get word to him.

Mary’s stepmother arrives in Cranford, and the truth that Mary has in fact gone back on her promise to marry Mr. Turnbull is revealed. Mary decides to pursue her writing and leaves for London, leaving Matty alone in the house.

Harry has been miserable at his school, where he has been tortured by the other students. He runs away back to Cranford to discover that his family have moved on. Miss Galindo and the Reverend Hutton are adamant that Harry must return to the school, as that was what Mr. Carter, Harry’s benefactor, wished. A desperate and despairing Harry runs away, intending to stow away on the next train out of Cranford.

William, while working at the railway, stumbles across evidence of Edward’s embezzlement. Meanwhile, a fugitive Edward arrives home. It is revealed that he stole the money to pay gambling debts. The Bells are told that if convicted of the crime, Edward will be deported as an indentured labourer to the colonies (presumably Australia). Mr. Buxton seizes upon the opportunity to offer Peggy a deal. He will make the problem disappear if she calls off her engagement to his son William. After thinking it over, Peggy decides to refuse Mr. Buxton’s offer. The police arrive with an arrest warrant for Edward, and Peggy immediately decides that she and her brother will flee to Canada. She is to go with him because she fears that on his own, he would succumb to his vices and be destroyed. They are to leave by the next train.

Miss Matty decides to tell William what has happened, and he races off to catch the departing train.

Whilst running away, Harry lets Bessie the cow loose without realising and Bessie is hit by the train whilst crossing the tracks. The carriages of the train are knocked to the ground, and William arrives at the site of the train crash searching for Peggy. William manages to save Peggy from the wreckage but Edward is killed when the locomotive explodes.

Miss Galindo and the Reverend search for Harry after realising he was on the train when it crashed but instead find his corpse and mourn the death of Harry. Shortly after, the Reverend realises Harry is still breathing and they are relieved to find out that Harry is alive.

As everyone is devastated by the damage done by the train crash, Miss Matty decides she will use some of the money from her shop selling tea, to attempt to restore the assembly hall and take everyone’s minds of what has happened. The ladies of Cranford work together with Peter to bring the assembly hall back to life and arrange a magician to play at the hall on Christmas Eve followed by a waltz to both celebrate the marriage of Captain Brown and Lady Glenmire and to bring together the shocked people of Cranford. On the way to the evening at the hall, Mrs. Forrester is still seen to be grieving the death of Bessie, when Harry approaches her and presents her with a new calf to replace Bessie and apologize for being the cause of her death. The community gather in the newly refurbished hall when Mrs. Jamieson arrives to the event, showing that she finally agrees to and approves of her sister-in-law’s marriage. The magician then starts his show and asks Miss Pole to enter his “magic box”. He then asks Miss Matty to come up and open the box. She then finds Miss Pole inside the box holding Tilly and Jem comes in the door and says he has decided to come back. The night goes ahead and the entire town come together at last for a final waltz where everybody is seen to be happy.